March 03, 2012
Fred Lomax was an elder brother of my Great Grandfather, Frank Lomax. I never recall meeting him. My mother and her mother Jenny(Jane) Dunn (Lomax) spoke fondly of him. In fact the rest of the Lomax clan were always regarded in high esteem. (Genealogy to follow)

However it seems that he may have been the only one who held a high elected office in his local council. My Grandfather Tom Lomax worked for local authorities in his capacity as a borough surveyor. Tom was 22 when Fred Lomax was in the chair and he may have been working for Tottington UDC at the time. He designed the "Catsteps" The steps that lead off the road from Stormer hill to Old Kays and thence on to Turton Road.

However this post is to publish the 1922 yearbook of the Tottington UDC, when Uncle Fred was its chairman.

The book is pocket size about 8 inches by 4 inches, covered in a cloth covered card board a grey colour. Clearly designed to be used in meetings. It is quite well used the wear on it must have been made by the user(Fred). Lovely bit of memorabilia, my grandmother, Jane Lomax treasured it. 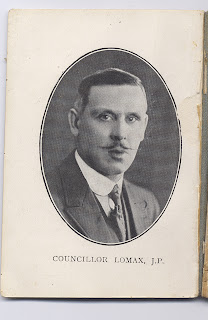 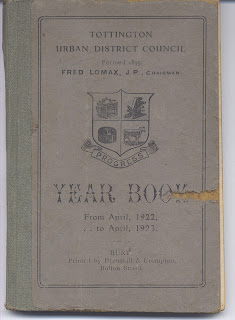 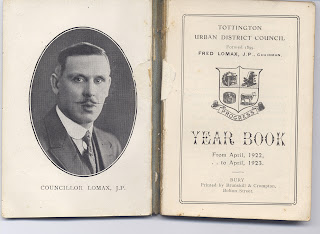 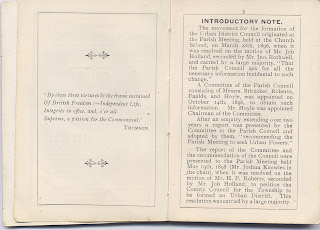 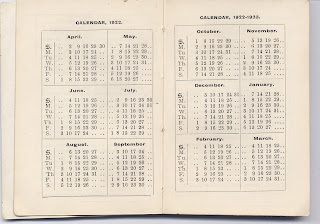 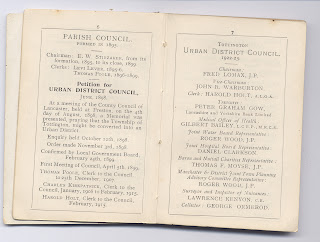 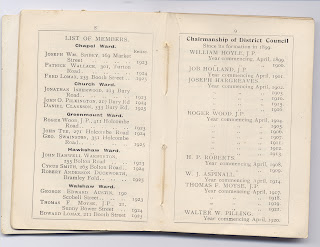 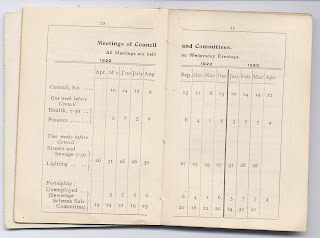 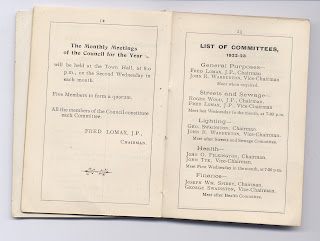 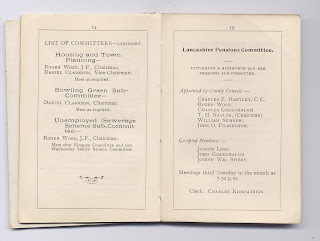 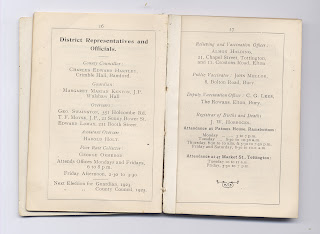 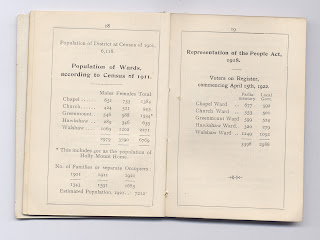 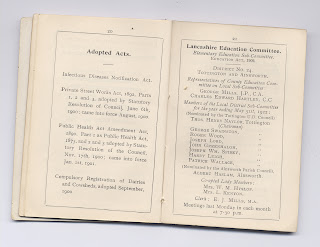 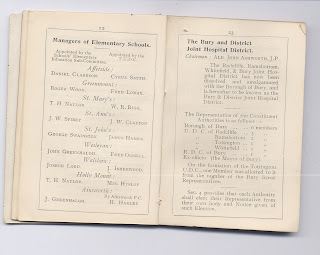 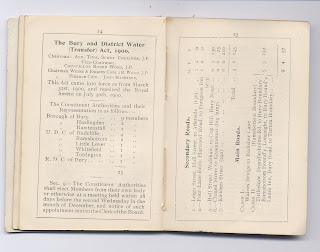 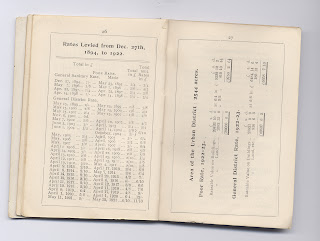 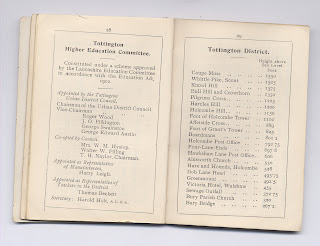 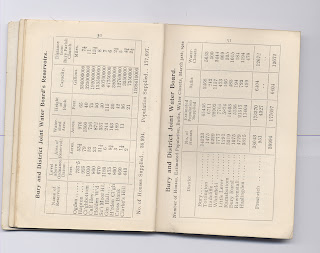 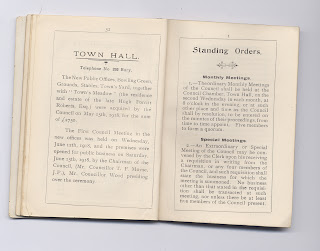 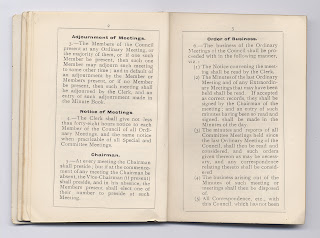 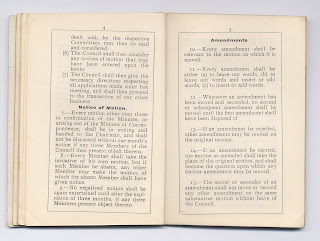 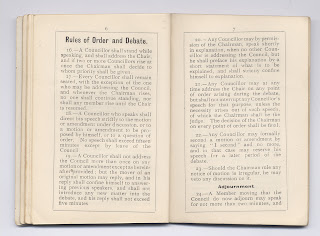 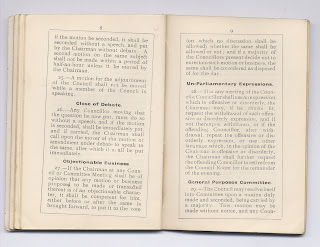 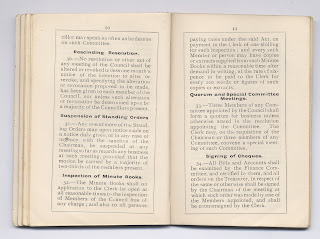 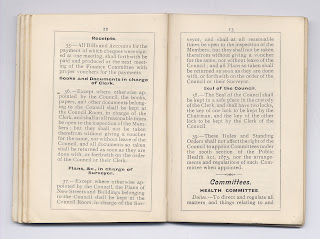 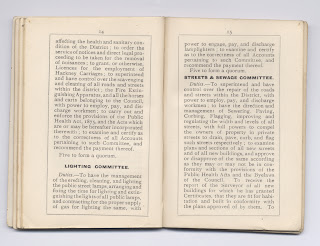 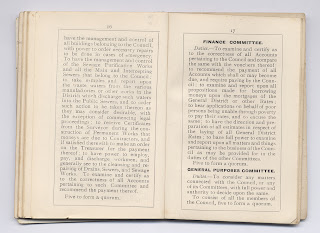 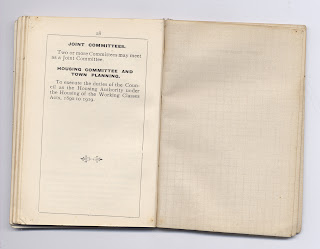 That's it folks!
This page will be updated shortly... I know its awful to leave it like this... but I am sure it is of interest to quite a few people. I will add captions and more info this week.
1922 Fred Lomax Greenmount Old Tottington Tottington UDC Urban District Council

Hope I am not transgressing an ancient copyright! I probably am, but I am publishing the March 1980 copy of Lancashire Life that has the article on Tottington - That makes 32 years. Pictures and captions first followed by the text. (My comments in brackets). A copy of the PDF can be found here. It is a very large file sorry! I will transcribe the rest shortly!

The start of the transcription starts here: The italics are mine!


It's hard to think of Tottington as being a part of Greater Manchester. The long straight road leading to the town out of Bury is lined on either side with splendid terraces of houses, stone-built and and fortress-solid, so that driving between them is like passing through a spacious railway cutting. And although you will find that Messrs Wimpey and their ilk have erected modern estates which differ not one brick from other modern estates any where in Britain, the terrain is different, and the view is different, and the place has an almost intangible indivi…
Read more

This is a scan of the piece of paper attached to the rear of the photo. This is my mothers writing - I suggest that this info could easily be 50 years after the event - so it wasn't current at the time. I suspect that my aunt Irene or even my Grandfather Tom (Lomax) was grabbed by my mother and asked to fill in this info. My mothers writing never varied during her lifetime. - However My fa…
Read more

Managed to purchase three old photographs of Tottington on the web. I believe they are all dated about 1900. There is a little history behind each one, hopefully others will add to them too. Apologies to anyone who bid against me, I was determined to own them! Do not hesitate to download or copy them. I have considerably better scans than the one's on the web. Please ask if you intend to publish them!
The comments seem quite correct - the left hand side of the road has not altered.


I may add to this posting - I just wanted to add the pix. I think I also need to add links into the important pages it relates too.

That's it for now, more stuff to follow
Read more