November 08, 2012
Jimmy Cosgrove was my Aunt Irene's husband, can't recall anyone having a bad word to say about him. A short man but huge in heart and generous to a fault. He'd served his time in the army. He was a chauffeur for the Co-op, took a great deal of pride in his job and his appearance and actually died on the job. My one enduring remembrance is his corgi motorbike, I seem to recall that it took an awful lot of stripping down and rebuilding just to keep going. Perhaps I get my somewhat ready ability to get covered in oil from Jim. He seemed to like my company though and occasionally gave me money to help...

I have included the conversation from Ancestry - My family tree is public there. I have deleted Paul's email address from the conversation. Any one with any interest can work through me.

I will be adding to this file when I get chance. It was only by chance that I stumbled on these pictures. His death cast a huge gloom over Brookhouse. It most definitely wasn't the end of an era. But it felt like it to an 8 year old. My Aunt went back to work the day after his death. I doubt that she took the full day off for his funeral. A lot of her reasons to be, had gone with his death.


This is the transcript of the Ancestry conversation.


Hi, I'm related to the Cosgrove family & noticed that you have Francis Cosgrove & a few others in your tree.

I do have some info that may be useful to you.

Please could you let me know the link to you & the Cosgrove's?

Hi, An Update.
My Great Grandfather had 2 Children Tom Lomax, who was my Grandfather, and his sister Irene Lomax. My Great Aunt. I knew both well we all lived together in Tottington and My Grandfather moved in with me in Lytham. Irene married James(Jim) Cosgrove(B. 23 Sept 1897). She was a Further Education teacher at Bury Tech. Jim was a chauffeur for the COOP. I knew Jim too, he lived at Tottington with us. He died on the job when I was about 8 I think. I have to admit that I haven't investigated this side of the family. His father was Francis (1864) and mother Harriet Burns(1864) I believe they came from Ardwick in Manchester. Presumably Irish stock! Links conveniently with my fathers side eventually! Jim was an inveterate tinkerer, he had a motorbike that he always had in a million bits. I was his helper! or was it the florin that he managed to produce out of thin air! I recall he was short. I have photographs of the pair of them. He was not much taller than Aunt Irene. There were no children. I recall they married quite late in life. I have the MC. I will update my Public Tree when I get chance. I think Jim may have had a brother. My mother Pat Lomax was extremely fond of Irene, but she did not concentrate on the Cosgroves. There are always corners in the tree that seem to be overlooked. Hopefully that fills in my link for you.
Happy to do scans and stuff. email or snail mail. Good Hunting! Any info greatfully recieved!
Jol Martyn-Clark - Freezin' St Annes.

Hi Paul,
Uploaded some Docs to Jim's profile. They are quite low qual. I have scanned them at huge megs fr my own files, I will upload some photos of Jim and Irene when I can find them. (already scanned but on other PC)

It was great to hear back from you - Cosgrove is my wifes family - My father in law (Joe Cosgrove) sounds a lot like James (Jim) - when I say a lot I mean a scary amount!

I have quite a lot of info - census docs,a few parish records, plus a map showing where Shores building and the rubber works were in Ardwick.

Jim was the brother of Francis William Cosgrove b circa 1888.- he is the line to us. I can confirm that FW's parents were Francis & Harriett. Francis seniors parents were called Thomas & Mary Ann Cosgrove who came over from Roscommon - I have census info for the family from 1861 so assume they came over around the time of the potato famine

Rather than attach these docs to the online profile I'd be happy to send you copies along with a report from Family Tree Maker that gives you the line info.

my email address is @live.com, if you could let me have yours I will fire some info over to you.

Kind regards
Paul
Another touch of irony: The librarian where I work comes from Roscommon. He says there are many Cosgroves still there. He suspects it a bit like the Lomax's in Bury. Everyone thinks they are related but unable to figure it out!
Do actually feel that I can upload the maps of Ardwick to the Blog at some point as well as a screen grab of this side of the family. I will be emailing Paul with the web address.

As mentioned these are the records of Jimmy's war service, 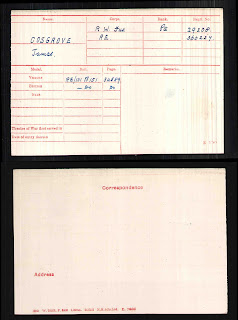 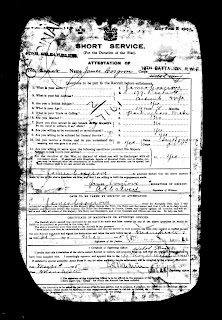 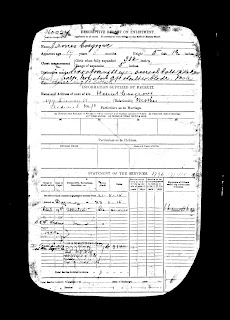 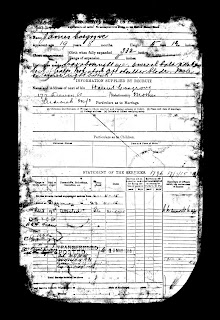 This Division was formed between September and December 1915, composed of some bantam units and others which had a mixture of regulation-height and shorter men. The Divisional staff assembled at Stanhope Lines, Aldershot, early in September 1915 and by December the various units had concentrated at nearby Blackdown, Pirbright and Woking.
The Division moved to France between 2 and 6 June 1916 and by 9 June had concentrated near Lillers. It then served between June and late October 1916 on the front near Loos. The 40th Division remained on the Western Front throughout the rest of the war and took part in the following engagements:
1916
The Battle of the Ancre (a phase of the Battles of the Somme 1916)
1917
The German retreat to the Hindenburg Line (March)
The capture of Fifteen Ravine, Villers Plouich, Beaucamp and La Vacquerie (April and early May)
The Cambrai Operations, in which the Division participated in the capture of Bourlon Wood (November)
1918
The Battle of St Quentin*
The Battle of Bapaume** the battles marked * are phases of the First Battles of the Somme 1918
The Battle of Estaires+
The Battle of Hazebrouck++ the battles marked + are phases of the Battles of the Lys

After suffering heavy losses during the Battles of the Lys a decision was taken to reduce the Division down to a cadre. This took place from 2 May. Divisional HQ moved to St Omer to 4 June, then went to Lederzeele and Renescure (from 23 June). By the middle of the month all training cadres had left. A number of Garrison Guard Battalions joined during June and were converted to fighting units. Orders were received to reorganise the Division and this was completed by mid July 1918. From 18 July the Division once again took part in active operations.
1918
The Final Advance in Flanders, including the Battle of Ypres

On the night 10/11 November the Division was relieved and Divisional HQ moved to Lannoy.
The Division moved to Roubaix on 25 November. Demobilisation proceeded and by mid May 1919 the Division ceased to exist.


What was a bantam, or a bantam unit?

The bantam is a fighting cock; small but hardy and aggressive.
The formation of the bantams
In 1914 the Member of Parliament for Birkenhead, Alfred Bigland, pressed the War Office for permission to form a battalion of men who were under regulation size but otherwise fit for service. A few days later, some 3,000 men had volunteered, many of whom had previously been rejected as being under height.
The original men were formed into the 1st and 2nd Birkenhead Battalions of the Cheshire Regiment (later redesignated the 15th and 16th Bns). Other regiments began to recruit similarly: the Lancashire Fusiliers, West Yorkshires, Royal Scots, and Highland Light Infantry most notably. Many of the recruits were miners. Eventually these units were formed into the 35th Division.
Another Division, the 40th, had a mixture of bantam and regulation units, although it is generally recognised as a bantam formation.

Allied Victory Medal (Victory Medal) was awarded for service in any operational theatre between 5 August 1914 and 11 November 1918. It was issued to individuals who received the 1914 and 1914-15 Stars and to most individuals who were issued the British War Medal. The medal was also awarded for service in Russia (1919-1920) and post-war mine clearance in the North Sea (1918-1919). 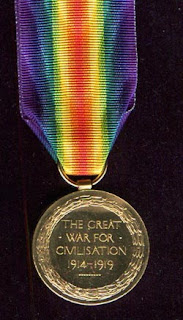 British War Medal was awarded to both servicemen and civilians that either served in a theatre of war, or rendered service overseas between 5 August 1914 and 11 November 1918. It was also awarded for service in Russia, and post-war mine clearance in the Baltic, the Black Sea, and the Caspian Sea between 1919 and 1920.