This is a scan of the piece of paper attached to the rear of the photo. This is my mothers writing - I suggest that this info could easily be 50 years after the event - so it wasn't current at the time. I suspect that my aunt Irene or even my Grandfather Tom (Lomax) was grabbed by my mother and asked to fill in this info. My mothers writing never varied during her lifetime. - However My family seemed to have a good name for faces and names. I would like to assume they were right about the names in the photo. They will have all grown up together and gone to the same school - families intermarried - I am probably related to half of them!
(This is in response to an email -

Hi,
I am intrigued by the photo in your blog of Tottington Wesleyans 1909.
Is it possible to identify which is the person marked Ger, Anson? Is he the fourth person from the left on the back row? I have a George Anson born 1898 as a distant relative in our family tree, living at 20 Club Row in 1901 and 1911. He is the right age to be in this photo, he also had a twin sister Bessie.
Also the Warburton, is he the third from left back row or are there illegible names in between? I have two Warburton cousins the right age to be in the photo. 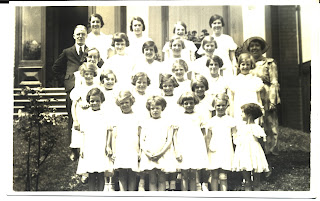 My Aunt Irene took herself off to school when she was 5, so the story goes. She was a dedicated learner, she stayed in education until her retirement. I had the strange distinction of being a student at Bury Technical college when she was Head of Department, quite scary, no opportunity to fool about then. However these pix have come into my possession via my Aunt Irene or my Grandmother.  Jane Dunn married Thomas (Tom) Lomax. Irene Lomax (Cosgrove) was my aunt.


The photograph above is called "sermons 1934 ish" Again no certainty about the people in the photo - however I think my Aunt is on the back row. 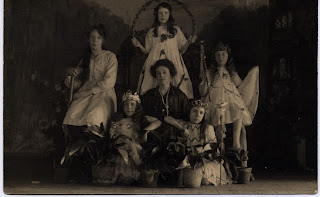 The photo to the right has no annotation on it whatsoever. Suspect it is a school play or for a pageant, suggest the same date. 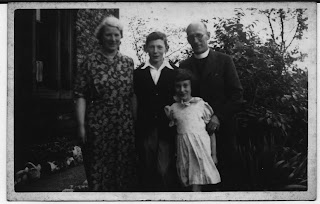 The bottom picture is labelled Reverend and Mrs Whittle, Donald and Christine. I am "assuming" that he was the incumbent at the time. Very difficult to say the year. 30's perhaps! A search on the internet including Ancestry reveals ... nothing
Bury Technical College Christine Whittle Donald Whittle Irene Cosgrove Irene Lomax Lomax Old Tottington Rev Whittle t Thom Lomax Thomas Lomax Tottington Methodists