We are visiting Cornwall

March 17, 2011
Dug out a beautiful postcard of Feock. Its on the opposite side of the county to which my father normally visited. The actual picture shows the "Come-to-Good" Quakers meeting house. I think the picture must have been taken in 1937, this is one year later than the Francis Frith pictures. This picture is from a different angle than those. There is a very full description at the Genuki website. I do not recall any visits to Feock with my father, but certainly St Just and Trellisick. Visited the Eden centre and hope to return this summer. There are many memories to publish from Perranporth and also St Agnes.The Meeting House was built in 1710, was in use up to 1993, still stands and is under the patronage of the National Trust. The view of the Old Vestry is the reverse of the one on the Francis Frith site. Lately I visited the Burial Ground at Sunbrick in Cumbria. This is where Margaret Fox was buried in 1702. There are several inconsistencies in the 2 inscriptions there. 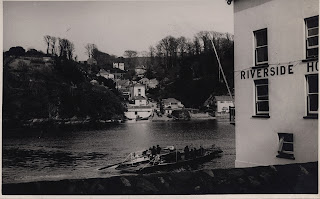 The second postcard in my possession is a 1950's photograph of the ferry between Fowey and Bodinnick. Not only had my father and mother spent time there after they were married. I visited in the late '60's when working for the National Trust at Lanhydrock house. When my wife and I visited Cornwall, we didn't renew the family's relationship  with this beautiful little village on the south coast.
Bodinnick Come to Good Cornwall Feock Ferry Fowey Friends Meeting House