Margo was my Godmother, there is plenty of information on the internet, but its perhaps the more personal relationship with my mother's and my grandmother's side of the family that I can bring into this page. Not quite sure how the relationship started with Margo her sister, Liz and my mother Pat. They were based in West Hartlepool. My Grandfather Tom, was the the borough Surveyor there too. He had unofficially sort of separated from my Grandmother then. This was his first "proper job". Undoubtedly very close these three girls - certainly time in Buxton was mentioned frequently, they may well have been sent there during wartime. A firm and lasting friendship grew and continued all the way to my mother's death. My Grandmother Jane and Mabbs (Mabel Green - Margo and Liz's mother) was very close too. I never got to meet Tommy Green, Mabbs' husband.

Mabbs stayed with my Grandmother in Brookhouse on numerous occasions, Jane ventured to West Hartlepool too. There are quite a few photographs, they will be published here when time permits.  Liz had children, at least two, an elder girl, same birthday as mine but a year older - I was instantly struck. A younger brother Julian with whom I became quite friendly with, I was shipped out to West Hartlepool too for a couple of summers.

The relationship continued when my mother went to the Royal School of Music about 1946, Margo was already in London and had struck up this relationship with Lionel. Shortly after, my mother will have met my father and I presume they were very close as a foursome. There is little doubt that Margot and Lionel knew the two big secrets that my mother and father had. Strengthened the bond between them if anything. There is no way the mothers (Jane and Mabbs) knew.

There was always an air of Margot around the place. Her painting was above the fireplace - I gave it(back) to Liz as one of the conditions of my Mother's will - a decision that does not fit very easily in my mind. I loved the painting too.

I don't remember much meeting and joining up with Margot and Lionel until the two years we went to Norfolk for our holidays. We stayed at Wells-on-Sea in a caravan - Must have been about 1966 to 67. My father had a MG 1100. I do recall driving the car. We drove down to Suffolk, they had a thatched cottage near Bury St Edmund's - Rattlesden, I believe. Margot and Lionel had a pale blue Renault 4L, a most strange car, but it was superb for carrying around art gear. My father's car broke down in Rattlesden - the local garage charged a kings ransome to fix the clutch - but it meant we stayed a few more days. Rattlesden is a lovely place - there was always an air a calmness when Margot and Lionel were about. To me it was no imposition, but I suspect my father was quite mad inside - he must have been worrying about the car - getting back to work, he had started teaching too. For me just being around these two graceful people and touching this magic was well ... Magic. Not sure how much this influenced me in my choice of study as well as where I have landed now.

The pictures: They are all scanned at quite high resolutions from postcards in my mother's collection. I have done a little bit of Gimping here and there. I have absolutely no idea of who owns the copywrite or where the original paintings are. If you own them enjoy. If you copy them enjoy - If you want to add a comment please do so - incidentally the Orwell Bookshop appears to be still going - I wonder if they have any postcards left? 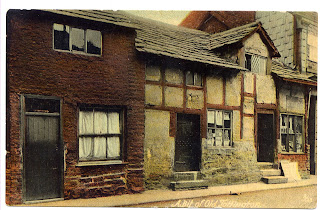 This are 2 old photographs of Market street in Tottington.  The first picture is a hand coloured tinted version of the second one. I have given both of them the Photoshop stuff. The colours in the first are not mine. They were already on the picture. I suspect the colours may be reasonably accurate as the pictures have been in the family quite a while.  My Guess this is at the high point of the Village opposite to where the Coop stands. I do not remember it, I also guess that it is dated about 1900. However I do recall a picture house, Movies to you and me standing in its place. I went once, some sort of soppy film about a man on the run visiting his pregnant wife in hospital. A paper shop stood in its place later and I believe a health centre now stands there. As you carry on to the right the road forks at what was the Printers. The left fork is Turton Road - goes to Bolton, Affetside, Edgeworth. The right hand fork goes to Greenmount, passes Brookhouse and would go to Holco
Read more